A man asks his wife what she wants for Christmas this year. Jewelry? A new car? No, she tells him, her car is new enough and she has everything she wants…actually, almost everything. They’ve been in their home in Edenton, North Carolina for twenty years, and it’s a great home in the historic harbor town. They’re just about two hours from North Carolina’s beautiful beaches, and they love to take their boat out from the marina. But she heard about something that would make their home even better – rolling shutters. 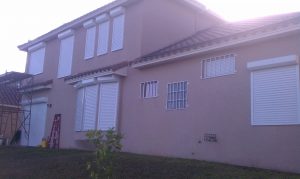 With rolling shutters, she tells her husband, they don’t have to worry about putting up plywood before hurricanes in Edenton anymore. Rolling shutters will make it easy to prepare for storms in North Carolina, and are a great update to the security of their home. She’s been looking online for roll-down storm shutters, and found out that they can get rolling shutters with hand cranks, with  motors, or with upgraded Hertz motors that come with a remote control – those are the ones she wants. In white. She’ll even let him have control of the shutter remote control, just like with the TV, she says. Her husband takes a look at the rolling shutters on HurricaneShutersFlorida.com and agrees, they look like they’re top-quality products. They’re custom built, he likes that. And he sure will be glad to no longer climb the ladder with plywood. It’s settled, he says – this year he’ll get her the roll-down storm shutters in Edenton she wants.

At Empire Construction & Development, we manufacture rolling storm shutters for our customers in Edenton, North Carolina and throughout the US. Our roll-down shutters can be used on residential and commercial buildings of all types. Roll-down hurricane shutters from Empire Construction & Development are made of durable extruded aluminum, and built to adhere to the most stringent wind codes in the country. Rolling shutters can be used to protect windows and doors from the high wind, flying debris, and heavy rain that hurricanes and tropical storms can bring. Rolling shutters also make excellent security shutters, and can be deployed quickly and easily from within the home.

The storm shutters we custom make at Empire Construction & Development are both reliable and affordable. In addition to rolling shutters, we manufacture:

for our customers in some of the most storm-prone areas of the USA and beyond. Take a look at what our customers have to say about our storm shutters, and then pick out the ones that are best for your home or other building in Edenton.

Contact us for a free quote on the cost of ordering rolling hurricane shutters in Edenton, or call: 888-474-3555 to speak to a member of our storm protection team about your shutter order. When you buy rolling shutters from Empire Construction & Development, you can protect your home from storms and add an easy security feature to your home in Edenton, North Carolina.