Morehead City has many beautiful beaches in addition to other attractions, like the fishing, boating, and golfing that coastal North Carolina is famous for. Coastal rental properties are becoming increasingly popular in Morehead City. Locals, those visiting for the day, and longer-term vacationers come to Morehead City’s coastal attractions for fun and relaxation. But hurricanes from the Atlantic Ocean may also make their way to Morehead City this year. Installing high-quality hurricane shutters on your property’s windows and doors can help protect your building against storm damage in coastal North Carolina.

At Empire Construction & Development, we custom-manufacture several types of affordable and reliable storm shutters for our customers in Kinston, North Carolina, including:

Our roll-down hurricane shutters are popular storm protection shutters that can also be used as security shutters and privacy shutters. These shutters work to reduce the heat that enters your home, add shade, and can minimize outside noise too. Residential and commercial property owners can increase the value and security of their buildings — while adding great storm protection to their windows and doors — with rolling shutters from Empire Construction & Development. 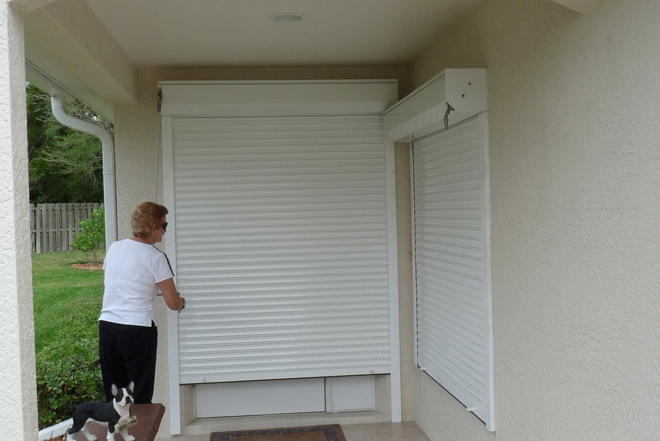 Rolling hurricane shutters from Empire Construction & Development are built of sturdy extruded aluminum with 40mm or 60mm blade heights. These shutters can be made to operate manually, with a motor, or with a remote-controlled motor. Whether you use the hand crank or the motor option on your rolling shutters in Morehead City, North Carolina, you’ll be able to quickly and conveniently secure your home whenever you need to.

What are the color options for rolling shutters?

Are these rolling shutters hurricane-rated?

Yes. At Empire Construction & Development, our roll-down shutters and our other storm protection products are made for storm protection. Our high-quality rolling shutters adhere to the most stringent wind codes in the country, and are designed to withstand hurricane force winds, impact from storm debris, and other hazardous conditions. Homes, rental properties, hotels, restaurants, stores, and other buildings in Morehead City can use rolling shutters for hurricane protection.