How much does it cost to replace a window? What would be the cost of new window panes for your whole house? Unless you renovate your home frequently, you probably won’t know the price of repairing and replacing your windows until it’s time to do so. If your new windows are for a home remodeling project, one that you’ve budgeted and planned for, it’s no big deal and you’re probably even happy to do it. But repairing and repairing broken windows after a storm or severe weather event can be inconvenient, expensive, and stressful. Protect your windows and prevent having to deal with broken glass by installing roll-down shutters on your home or commercial building.

You can get ahead of unexpected window repairs with rolling shutters from Empire Construction & Development. Instead of waiting until your windows crack or shatter during a severe storm and then needing to get them fixed on short notice, securely cover them with our sturdy roll-down storm shutters ahead of high wind activity, a storm, or any other danger. These rolling storm shutters for homes, businesses, hotels, and other properties completely cover windows and doors for maximum storm protection. Rolling storm shutters from Empire Construction & Development are the toughest around – they’re made of heavy-duty extruded aluminum and built to adhere to the most stringent wind codes in the country. Preventing broken windows by installing our rolling storm shutters on your home or business will save you trouble in the long run.

Where can you order rolling storm shutters from Empire Construction & Development? If you’re looking for the best storm shutters you can buy, take a look at our website: HurricaneShuttersFlorida.com. On our site, you will find information on our custom-built rolling shutters, including how to install roll-down shutters, product specifications, and more. You can order rolling shutters online for your whole home or office building, for just a few windows, or for one opening you want to protect, like a storefront window or a sliding glass door. 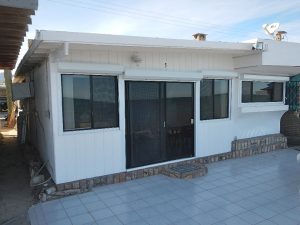